Why May 12th? Because it’s Florence Nightingale’s birthday, the famous English army nurse who inspired the founding of the Red Cross. It was believed that she herself suffered from ME and Chronic Fatigue Syndrome and was often bedridden throughout the last 50 years of her life. Despite her suffering, she still managed to found the world’s first School of Nursing. 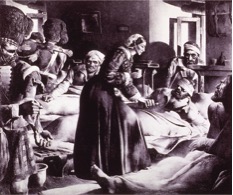 This May 12th marks the 24th year for the International May 12th Awareness Day. It was originated by Tom Hennessy, the founder of RESCIND, Inc. (Repeal Existing Stereotypes about Chronic Immunological and Neurological Diseases), who stated:

“If a cause and cure are to be found for ME/CFS, FM, MCS and related illnesses in the near future, government and medicine must be made fully aware of their scope and impact. Despite the efforts of a number of dedicated groups and individuals, there are still vast pockets of ignorance and misunderstanding. To this day, many patients run directly into a medical establishment that, in general, knows very little about these serious threats to human health. It is therefore crucial that all those affected by the illnesses make their voices heard, especially on May 12th of each year.” [RESCIND. INC. org]

You might ask: Why Awareness for Chronic Immunological and Neurological Diseases and Syndromes? It’s because most people are not aware of how many millions of people are affected and what the real problems are that they are facing. Some of the most basic problems associated with these illnesses are:

1) These chronic immunological and neurological diseases and syndromes are complex, the symptoms vary from patient to patient, and they are not that easy to correctly diagnose. Many doctors have not done extensive studies on these maladies and are lacking expertise in even recognizing them. As a result, many people are misdiagnosed or worse, they are told there is nothing wrong, despite suffering often quite debilitating symptoms.

2) There are no full cures for these illnesses as in most cases their causes are still utterly unknown. Some dedicated and knowledgeable doctors have created holistic treatment regimens that do help and have allowed people to recover functionality in life, however most medical professionals only recommend the conventional “Treatments” that mostly involve pain meds and antidepressants as an attempt to relieve some symptoms.

In case you are not familiar with these immunological and neurological diseases, here is a very short explanation of some of the more commons ones with some of the main symptoms that go along with each:

The bottom line is that the true causes and actual cures desperately need to be found. THIS is why AWARENESS of these chronic illnesses is so VITAL. Support for research and demand for action is crucial to such accomplishments.

These illnesses affect tens of millions of people. It is estimated that in the U.S. alone more than 5 million people suffer from Fibromyalgia, Lupus over 1.5 million and ME/CFS more than a million. There are over 300,000 people diagnosed with Lyme Disease per year.

So maybe this explains why all the kerfuffle. Millions of people are suffering and no one knows why or how to heal them!