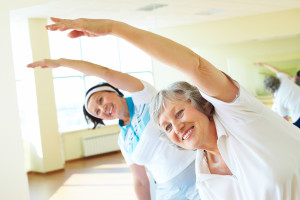 Fibromyalgia and exercise don’t seem to go together very well. You are achy and tired and about the last thing you feel like doing is exercising. However, exercise can greatly reduce pain and even fatigue if done lightly (not overdone) and routinely.

A new study just done on over 400 people verified as having Fibromyalgia, published by the American College of Rheumatology, which found that substituting 30 minutes of sedentary time with light physical exercise resulted in less body pain and noted improvement in vitality, symptoms and even social functioning. You can read the full study HERE.

So, yes, it isn’t going to be what you feel like doing. But if you can get yourself to do it, it is going to improve your symptoms.

First and foremost, no matter what form of exercise you do, start very light and build in intensity and duration very, very gradually.

Start with light stretching. Gently stretching different parts of your body. Very light and gentle. Your neck, your back, legs, arms. I would start with just that for a week or two if you have not been exercising for a while.
Music can help get you going. I have found some songs that help to get me into gear for doing some exercise. Have you ever experienced hearing a song that made you want to get up and dance? Well, I am talking about one of those types of songs. People’s taste in music varies greatly, but mostly likely you have a song or two that would make you feel that way. So when I am having a hard time convincing myself to do some exercise, I plug in my headphones and start playing one of those songs. It definitely helps to get me started.

You may experience some backlash after exercising (which is why you need to start off light, light, light). But even starting light can cause some muscle soreness or stiffness the day after. Stretching a bit when that happens will help. But in the early stages of starting to exercise, you may want to give yourself a day or two between exercising days to allow your muscles to recover. When I first started exercising after not exercising for a couple of years, I had to skip two days (except for some light stretching) and exercise every 3rd day. After some weeks I got to a point where I was able to exercise every other day.

Walking has been found in several studies to be helpful for Fibromyalgia symptoms and is definitely recommended. Start light and easy, no big hills and keep it short.

After weeks or months of walking, once you are in better shape, you can consider upping your game a bit and trying Interval Walking. Read more about that here…

Swimming is another fantastic way to get some exercise as it puts no pressure on your joints but does work your muscles. I recommend swimming in fairly warm water. Water that is too cold can tense up muscles more.

I have disc degeneration in my spine and quite a few types of exercise can aggravate that condition, but swimming doesn’t at all. In fact it helps my back as well as overall fibro symptoms.

A study was done of 75 people with Fibromyalgia, measuring their condition before and after 12 weeks of engaging in either swimming or walking for 50 minutes three times a week. In both groups, the walking group and the swimming group, average pain intensity decreased significantly.

My favorite exercise program is the Royal Canadian Air-force Exercise Plan. Actually there are two plans; one for men and one for women.

Written more than 50 years ago, these are simple exercise routines that anyone can do without any additional equipment. These routines are usually done in less than 10 minutes, or 12 minutes max once you are more progressed in the program.

They start on a very, very low level of exertion and increase in number of repetitions as well as required strength and agility on a very gradual basis, which you increase at your own speed.

You can download the two booklets – one for men (5BX) and one for women (XBX) at my website:

Read all of the information in the beginning of the booklets so that you understand the theory of these exercises and how the whole plan works.

If you allow an extra 10 to 12 minutes into your morning routine and do them before jumping into the shower, and do them daily, over time you will get into better and better shape. These won’t transform your body in a few weeks into Mr. Muscleman. However, done consistently over time, they will get and keep you in excellent physical condition.

There have been a number of research studies and analyses conducted regarding yoga and fibromyalgia:

A 2011 study published in the International Journal of Yoga Therapy, summarized the effects an 8-week course of yoga and meditation had on 11 people with fibromyalgia. Following the study, participants reported significant improvements in the number of days they “felt good” and did not miss work for reasons related to fibromyalgia. However, participants did not report decreased incidences of pain and fatigue.

A 2013 analysis of three research studies, published in the Journal of Pain Research, found that yoga helped to reduce sleep disturbances, fatigue, and depression while also improving quality of life. However, the authors noted that there are not enough significant studies to confirm a link between yoga and reduced symptoms of fibromyalgia.

A 2010 research study published in the journal Pain studied 53 female fibromyalgia patients who participated in an 8-week Yoga of Awareness program. This program included meditation, breathing exercises, gentle poses, and yoga-based instructions for coping with symptoms. After finishing the program, the participants reported significant improvements in measures of pain, fatigue, and mood associated with fibromyalgia.

A study done at Tufts University and Brown University found that Tai chi results in similar or greater improvement in fibromyalgia symptoms, even compared to aerobic exercise. The study involved 226 people suffering from fibromyalgia who had not participated in tai chi or similar practices in the 6 months prior to the study. Their average age was 52 years, 9o% were women and the average duration of body pain was 9 years. They practiced Tai Chi once or twice per week. Significant improvements were noted at 12 weeks on this program and even better after 24 weeks.

There are videos easily found on YouTube that show you have to perform these exercise.

Exercise is incredibly important in recovering from Fibromyalgia.

In fact, I would say that it is not possible to fully recover without some kind of regular, routine exercise.

The problem is that because we feel pain and/or fatigue, exercise is probably one of the last things we feel like doing. But this really is where you will need to pull yourself up by the ole bootstraps and get yourself to do it even though you don’t want to. You will see that it does help – a lot.