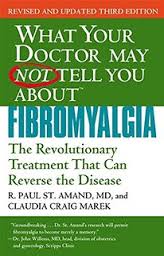 Paul St. Amand, M.D. and Claudia Craig Marek run the Fibromyalgia Treatment Center in Los Angeles California. They co-authored a book entitled What Your Doctor May Not Tell You About Fibromyalgia which lays out a protocol using Guaifenesin. His goal was that someone could read the book and follow the protocol it laid out and get well.

I was one such patient who did come to see him after following the guidelines laid out in the book. After a couple of years of following these fairly simple procedures, I got so well that I decided that I no longer had Fibromyalgia – I was at that moment cured.

I won’t tell you about the completely crazy and stupid things I did to my body after that (diving right back into a very high stress life because “I was all better now”), which caused a complete relapse of the condition.

However I will tell you that this is a treatment that seems to get a result, but it is something you need to continue to follow.

The theory it is based on is that FMS is caused by a metabolic defect resulting in retention of a biochemical substance within the cells themselves – a metabolic malfunction that results in an inability to produce energy.

These build up over years. The treatment involves taking an expectorant called Guaifenesin twice per day to purge this build up in the cells and reverse their effects.

There is a fair amount to the protocol, including eliminating all salicylates (plant products) from use on skin, including toothpaste, shampoo, soap, cosmetics, etc. This is not that hard as there are plenty of these types of products on the market without salicylates. However it does take a conscious effort to keep this point in.

It also requires that if one is hypoglycemic, that this be addressed with the appropriate diet.

There are also numerous articles that say the theory behind this protocol is unfounded. If you simply do a Google search you will find them. I really cannot tell you whether it is valid or not. I will say this though – the book has made it onto numerous best selling lists despite being around for many years and despite no marketing efforts. I will also say that it personally helped me to recover, although it took weeks and months of truly following the protocol described in the book.

I think it is well worth your time to examine their site and read the book in addition to following the many things I have covered in the other chapters in this book.